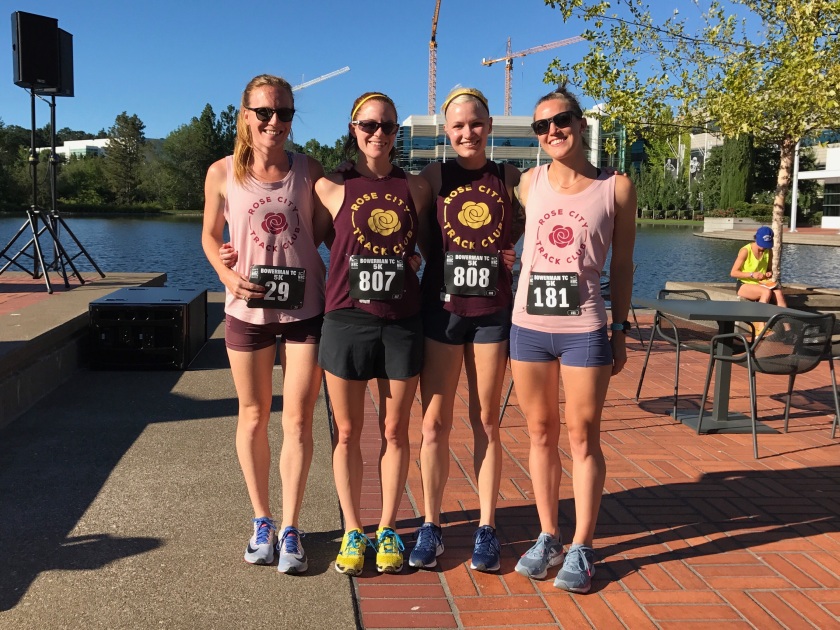 Last Saturday marked the 8th annual Bowerman 5K in Beaverton, OR and the first appearance of Rose City Track Club runners on its course. Clad in maroon, pink, and PRC blue, Fionna Fallon, Shasta Zielke, Krysta Gunvalson, Dominique Lopez-Stickney, and Liz Anjos took to the roads and trails of the Nike World Headquarters campus to test their fitness in one of Portland’s most competitive summer road races.

Fallon held her own in a strong field, placing 11th with a time of 18:25, just one weekend after her win at the Oregon Summer Half Marathon. Zielke smashed her own previous best of 19:02 for an 18:38 finish. Of her first time dipping below the 19 minute mark, Zielke remarked that she didn’t feel totally confident about her fitness going into the race, but just decided to see how she felt that night. She said, “I focused on trying to run strong throughout and picked out a friend in front of me to try and keep sight of. When I came around the last corner and saw the finish line, I knew I was going to PR and I dug a little deeper for one final kick. It was a hard, but good day!”

Lopez-Stickney kicked it in to a 19:37, which was right on target for where she hoped to be in the midst of training for the Chicago Marathon this October.

Gunvalson and Anjos strode together through the finish, clocking 21:35 each. Gunvalson was just 11 seconds off of her personal best, and on a hot summer day to boot. Of her race, she wrote, “Not where I hoped to be this summer, but definitely not mad!” This was Anjos’ return to racing after several months off from injury, and her 7th time running the event.

Look for RCTC next when Krysta Gunvalson and Angela Vinton take on the Oregon Wine Country Half Marathon! ‘Til then, get the latest on Twitter, Instagram, and Facebook.