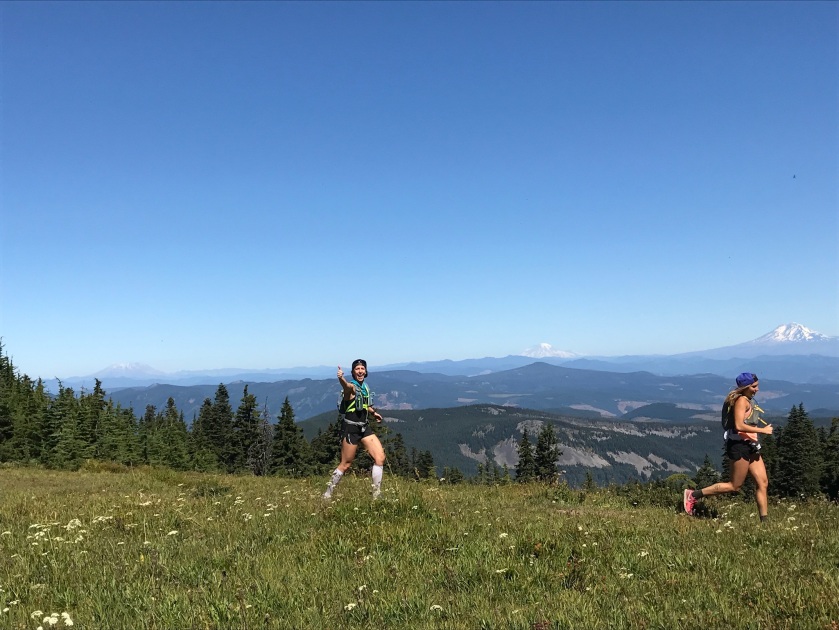 Last weekend was a celebration of Oregon’s scenic beauty as Rose City Track Club took on the Painted Hills Half Marathon, Oregon Wine Country Half Marathon, and 40 mile Timberline Trail around Mt. Hood. 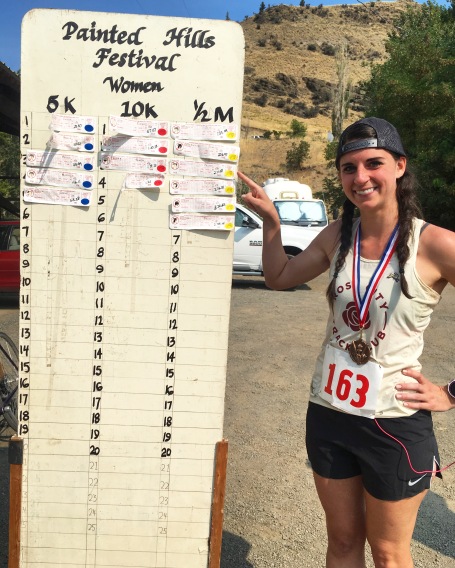 Jaime Musgrave spent her Saturday morning running among the famed Painted Hills, one of the Seven Wonders of Oregon. The half marathon course was remote and rugged, but Musgrave was up for the challenge as she placed third overall woman.

As if one half marathon over the weekend wasn’t enough, Musgrave went onto compete in the Oregon Wine Country Half Marathon along with RCTC teammates Krysta Gunvalson and Angela Vinton.

Vinton ran in stunning fashion, smashing her previous half marathon personal record by over 16 minutes for 2:02 flat.

Gunvalson was all smiles when we saw her at mile 9 and ran away with 2nd place in her age group. She wrote, “I had very different plans for this race 6 months ago, but after a roller coaster training block and an anemia diagnosis it was clear my goals needed to change. Not a PR and not indicative of my current fitness or potential, but I raced smart and had fun.”

As for Musgrave? She totally #crushedit and beat her previous day’s half marathon time by over 20 minutes!

There was much celebrating at the post-race wine tasting party. Congrats to our friends from the Oiselle Volée, Lyndy Davis, Erin Lewis, Nadia Dahab for their stellar runs!

Last Friday, a four person crew made up of Rose City Track Club members and friends took on a personal challenge of running all 40 miles of Timberline Trail, circumnavigating Mt. Hood. They completed their mission in 14 hours, beginning just before 5:30AM and finishing at 8PM. Here’s what Alex DeCino, Dylan Dougherty, Sarah Price, and Dani Reese had to say about their experience.

What’s the farthest distance you’ve run before this?

What was the most challenging part of this experience?

Alex: I think the most difficult thing was going through multiple rough patches where the mileage ahead seemed insurmountable, but you had to push through.

Dylan: For me the worst part was definitely having conflicting reports of how much mileage we had left to run. We were on track through about half way, but after that our watches were no longer in sync and our maps were not quite matching up with the landmarks. Passing hikers going the opposite direction were all saying different numbers and they were all essentially wrong. Never once had any of us considered quitting, and we were actually planning for 12-14 hours total time so we ended up right at the end of our predictions. But it did feel much longer than that.

Sarah: The hardest part for me, mentally, was the stretch after the Eliot River crossing and climb up to Cloud Cab, and the few miles after that. Those were probably between miles 24-30, but like Dylan said, our watches and maps started mismatching and we were really confused by where we were mileage-wise. The switchback climb up to Cloud Cap from the river totally sucked – it was super hot and we thought we’d get some relief at the hotel at Cloud Cap, but it wasn’t connected to the trail. So we kept going, and the trail kept climbing up, through sand, in the sun, with no access to fresh water for us to filter and refill our backs. That was, by far, my low point. I think we were all struggling so much by then that our unanimous frustration and exhaustion started making us all laugh.

Dani: I was expecting the most difficult part to be nutrition. I was really worried about feeling nauseous and not being able to consume enough calories. I was pleasantly surprised that my stomach held up thanks in part to our group who was committed to reminding everyone to eat something every 30-45 mins. The hardest was (as everyone else has described) confusion on mileage. Thinking you were further along than you actually were. This was hard mentally because it took a big shift in expectation. Luckily instead of being discouraged the group used humor to lighten the mood and kept everyone moving. So thankful for the positive attitudes of everyone in our group. ONLY 7 MORE MILES.

What was the best part of the experience?

Alex: Finishing, by far. The entire run took somewhere around 14 hours where there wasn’t really a moment to just stop and sit and mentally reset, because we were really trying to minimize our time stopped.

Dylan: The best part was definitely simply finishing, but I’ll throw a line over to the beautiful views that essentially have no other access point than this trail on the North and East sides of the mountain. It definitely helped maintain the spirits while it was getting harder.

Sarah: Oh man, aside from the whole thing?! Haha. This was a huge bucket list run for me, and I will definitely do it again. A few highlights though, were seeing sides of the mountain I had never seen before. There was a segment about halfway through that went through some beautiful regrowth within a old forest fire field, and the wildflowers were stunning. We stopped a few times for photos and to take in the views. The trail also leveled out at that point so it was much easier to run, which felt way better than hiking (in my opinion). I loved chit-chatting with some of the hikers on the trail, who were blown away by what we were attempting, and almost all of them were incredibly friendly and supportive. Lastly, when Dani and I saw Shasta and Monica near the finish, my legs suddenly were no longer fatigued, my heart became so full, and running the last few 100 meters became really easy. Holding Dani’s hand as we crossed the “finish line” and hit the Timberline Trail sign was a major high.

Dani: What was the best part of the experience? The best part was pushing myself past a previous limit. I had thought at the end of my first (and only) 50k race that there was no way I could ever run more than that. The pursuit of pushing the physical limits of the human body is one that really intrigues me and I consider this run another step towards finding out what my personal limits are.

Catch Rose City Track Club next this Sunday, September 9th as Fionna Fallon, Shasta Zielke, and Alejandro Fallas take on the Skagit Flats Half Marathon! As always, give @rosecitytrack a follow on Instagram, Twitter, and Facebook.