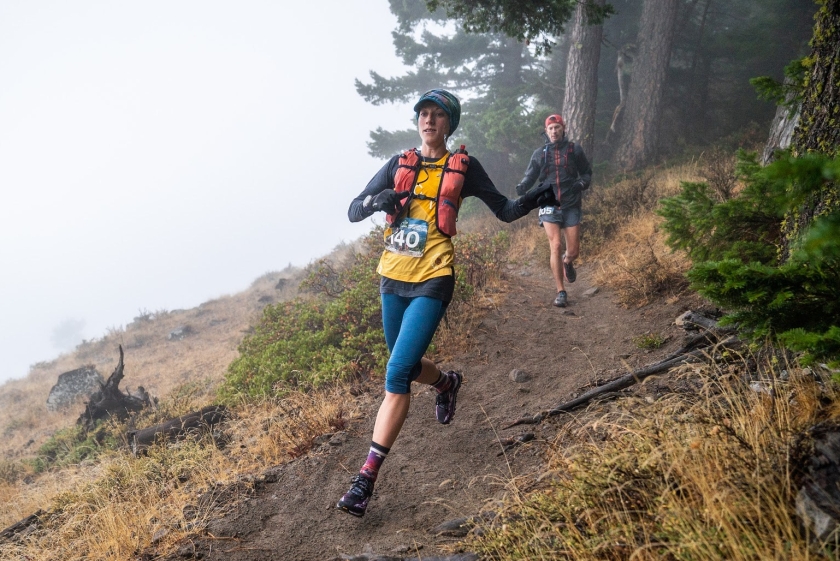 The fall racing season is heating up with two back-to-back weekends packed with performances by Rose City Track Club.

Nothing says fall like cross country! On Saturday, September 29th, 12 teammates took on the first of the Stumptown Cross Country Race Series in Lents Park. “The first race is always a good kickoff for the season and it’s always great to do a short race with lots of teammates around for cheering and support!” noted teammate Alex DeCino.

Fionna Fallon and Emma Huston led the way on the women’s side, finishing 7th in 18:24 and 8th in 18:25 respectively. Shasta Zielke, in 10th place, was stoked to and run a cross country 5K PR. “My time was only a minute off my all-time PR that was set on the track earlier this year. It was also exciting seeing so many RCTC teammates racing strong and repping well.” She noted. Zielke finished in 19:02. Rounding out the scoring team was Lauren Barth in 11th place, with a finish time of 19:12.

The next RCTC women to finish were Caitlin Jacobsen in 19:23, Teresa Stackhouse in 20:25, and Cate Maxson in 21:03. Leading the charge in the middle of the pack, Jaime Musgrave was driven by teammates and friends. “Cross country is always a humbling experience for me but showing up to compete is so much better when you’re surrounded by your teammates!” she said. Musgrave finished in 22:34.

For Emma Notario, Lents Park was her very first XC race ever. “I loved running as part of a team and hearing the cheering from RCTC teammates around the course!” she said. Notario finished in 23:47 and is eager to get back on the horse at Stumptown #2.

Close behind was Melissa Stocking who ran her first cross country race in 20 years and even managed a PR. “Lents Park is in my neighborhood and is part of one of my regular running routes. It was especially fun for me to run my first race with RCTC there,” she said. Stocking finished in 23:48. Rose City Track Club took 3rd in the female open team results.

Leading the RCTC men was Brooks Barth, maintaining his Clemson loyalties as he listened to a radio broadcast of the football game WHILE running. Brooks went on to finish in 18:45. Wife Lauren Barth noted, “Watching Brooks run his very first XC race ever with earbuds in and phone in hand was priceless!” Also repping on the men’s side were Glenn Kasin in 19:42 and Alex DeCino in 20:29.

Just one week later, Rose City Track Club toed the line across Oregon and beyond at the Portlandathon 5 Mile, Portlandathon Half Marathon, Wy’East Howl 50K, WHEE Run, Pacific 5K, Rock N’ Roll San Jose Half Marathon, and the Medtronic Twin Cities 10 Mile. For many, the weekend of races served as a tune-up for bigger fall marathons such as New York City or CIM.

In Portland, Liz Anjos took on the Portlandathon Five Mile after switching out of the half marathon due to injury. “It was a great chance to test out my speed and blow off some steam after some frustrating weeks with very little running,” she said. Anjos finished as the 1st woman and 2nd overall in 30:43. Katherine Tomlinson also made a last minute switch from the half to the 5 mile and finished strong in 37:04.

Meanwhile, eight teammates tested their legs over 13.1 miles in the Portlandathon Half. (Author’s note: All runners were derailed for 8-20 minutes by a rogue freight train rolling through the race course. Results have been adjusted by race directors for the stoppage.)

Alejandro Fallas showed all his hard work is paying off ahead of the NYC Marathon next month, with a big finish in an adjusted time of 1:16:15.

For Marla Smith, who finished in an adjusted time of 1:23:46, even a train couldn’t stop her postpartum comeback. “I am seven months postpartum, and getting back into my best shape post-baby isn’t easy. There is a lot less time for training and a lot of things that can stand in the way. I’m still racing because I love the challenge and want to better myself.” Smith ran her second fastest half marathon to date.

Shasta Zielke finished in an adjusted time of 1:24:04. “This would have been a big PR for me – over 2 minutes faster than my time this past summer at the Sauvie Island Foot Traffic Flat Half,” said Zielke. “I felt smooth, strong, and dialed in, especially during the later miles, which I’ve struggled with in the past. I’m bummed not to have an official PR from the day, but happy to see that the fitness is there especially ahead of my larger goal, which is CIM in December.”

Stephanie Ross, who is deep in training for the New York City Marathon, finished in an official time of 1:34:50. “It was great to see so many runner friends out on the course, whether in the full, half, 5-mile, pacing or volunteering,” she noted.

Also racing the Portlandathon Half were Glenn Kasin in an adjusted time of 1:31:57, and Leah Drebin in 2:02:08 while pushing her son, Koa, in a stroller.

Outside of the city, Caitlin Jacobsen took on the challenge of racing from Hood River to Mt. Hood Meadows in the Wy’East Howl 50K. With almost 9,000 ft of elevation gain and 4,600 ft of descending, nearly all on technical single track, the course set the stage for a grueling race. The weather, of course, only added more challenges with chilly temperatures, foggy skies, and a steady stream of rain.

“I basically ran solo for the entire race, so I found myself thinking about my Rose City teammates and other inspiring, motivating thoughts,” said Jacobsen. “It was definitely a test of mental strength as I questioned my reasons for running.” Jacobsen managed to hold on for a 5th place overall female finish in 6:10. “[This was] my toughest race to date, and I’ve raced for 16 years!” she said.

A little further south, Dani Reese returned to the competition at the WHEE Run along the Middle Fork Willamette National Recreation Trail in Oakridge, Oregon. Reese finished 1st overall (male and female) and set a course record in a blazing fast 3:21:49. “It was the perfect rainy, muddy PNW trail race,” said Reese. “Highlights include handmade ceramic pig mugs for the winners and homemade warm soup next to a fire at the finish line. Couldn’t have asked for a better day to run through the woods!”

Down in California, Fionna Fallon lined up for the Rock ‘n’ Roll San Jose Half Marathon in San Jose. “My goal was to break 1:19,” Fallon boldly stated. “I’m disappointed in myself for falling out of mental focus in the race. It’s a good reminder to myself that I need to keep my head in the game for my main race this season: CIM.” Fallon went on to run an 11-second personal best in 1:20:11.

Further south, Angela Vinton showcased her speed in the Pacific 5K in Long Beach, California. “The course ended inside the Aquarium,” she noted. “The last 0.1 mile was unique because it ran through a dimly lit tunnel with tanks of sharks on either side.” Vinton went on to finish fourth in her age group and 12th overall.

Last but not least, Krysta Gunvalson headed East to test her fitness in the Medtronic TC 10 Mile in Minneapolis, Minnesota. “I didn’t know what to expect from the day,” said Gunvalson. “I’ve run this event four times in the past and knew that I was relatively fit going into the race, but I’ve also spent the last nine months coming back from a stress fracture.” The day didn’t unfold perfectly, as they rarely do, but Gunvalson came in strong with a 38th place overall female finish in 1:07:13, good for an eight minute personal best.