When you join Rose City Track Club, you may opt for personal coaching with one of our running coaches. You and your coach will start by setting up a one-on-one meeting to review your running history, where you’re at with running now, and discuss short term and long term goals for the year. From there, you’ll receive a personalized training schedule throughout the year tailored toward your goals. Athletes are encouraged to check in on a regular basis with their coach via email or phone, as well as update their provided shared training log. Athletes will have the opportunity to touch base with their coach in person at the weekly team track sessions, as well as via email and phone. Greg leads the Tuesday night track session in Beaverton and Liz leads the Wednesday morning track session in Portland. 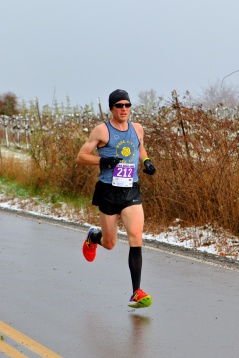 Greg Mitchell brings over 20 years of coaching experience to Rose City Track Club. He has coached successfully at the high school and collegiate levels as well as coaching numerous post-collegiate athletes to personal bests.

Mitchell’s coaching resume includes 10 years as a cross country and track coach at Linfield College in McMinnville, OR. From 2006-2009, Mitchell was assistant cross country coach at Linfield before being promoted to associate head coach in 2010, a position he held until his departure in 2016. Prior to joining Linfield’s staff, he spent four years coaching cross country and track at Rampart High School in Colorado Springs, CO. Both his boys and girls cross country squads enjoyed success, with the boys winning consecutive 5A regional championships in 2004 and 2005. Before becoming a head coach in Colorado, Mitchell spent time as an assistant at Gresham and McMinnville High Schools here in Oregon.

As an athlete, Mitchell was an all-state track competitor for Gresham High School and was a multiple-time conference champion and five-time national championship meet qualifier in cross country and track at Linfield College. More recently, Mitchell has asserted himself as a top-tier masters competitor. Since becoming a master in 2013, he has won 10 national titles in cross country and on the roads and set an American record on the track. 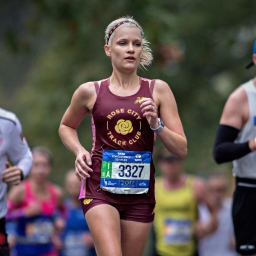 A new addition to the RCTC coaching roster, Liz Anjos would love to help you reach your running goals, whether you’re aiming for a new 5K PR, thinking of venturing into track or cross country for the first time, or going for a Boston Marathon qualifier and beyond.

Anjos’ coaching resume includes assistant coaching the Greenville College women’s cross country team in 2008, where they capped off the season as SLIAC Champions. She has been coaching individual runners for over nine years and served as a leader for the Oregon Volée team from 2014-2016. Anjos is certified as a USATF and NFHS coach, and currently serves as the head distance coach and assistant cross country coach at Mountainside High School.

Anjos discovered her zeal for competitive running as a senior at Greenville College, where in her first season of cross country was named SLIAC Athlete of the Week, and the following year earned SLIAC First Team All-Conference. Since then, Anjos has continued to prove herself a competitor on the track and the roads, most recently with a personal record of 36:44 at the 2018 Tenacious 10K and placing 4th at the 2018 Carlsbad 5000. She is an eight-time Boston Marathon Qualifier, two-time sub-3:00 marathoner, and is currently aiming to qualify for the 2020 US Olympic Marathon Trials.